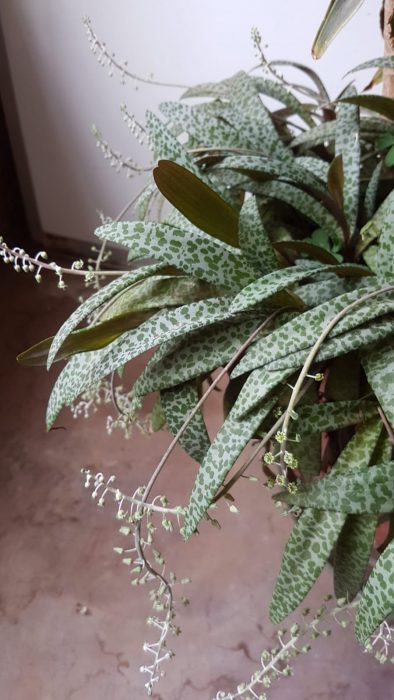 A small yet tough and hardy species, the silver squill (Ledebouria socialis) hails from the dry savannas of South Africa. This perennial is known for being a colorful and eye-catching houseplant. It has silvery leaves with green leopard spots, as well as unique teardrop-shaped bulbs that form above the ground. The silver squill also has the ability to store moisture in its purple, bulb-like stems during times of drought.

One of the most widely cultivated bulbs, silver squills are closely related to the hyacinth and are most often sold as a houseplant. However, they can be grown as a ground cover or even in xeriscape gardens in regions with warmer climates.

Though it resembles a succulent, and possesses the same drought tolerance, the silver quill isn’t technically this type of plant. The silver squill is a geophytic species of a bulbous perennial plant. You can expect its structurally unique leaves to grow in a lance shape and contain both silver spots and purple on the underside. Its flowers will grow during spring, displaying pink stems and small green flowers.

Silver squill plants are considered particularly easy to care for. However, they will require a winter rest period, either in a cooler area of your home or in certain states (with an agricultural zone of 10 to 11).

Since the entire plant only grows to be about 6 to 10 inches tall, silver squills are easy to grow both inside and outdoors in areas with limited space. A rosette will form from the foliage out of its bulbs.

The silver squill will require some access to bright sun (for at least three to four hours per day), but it should remain indirect. It can also adapt to the shade and is often found growing in closed evergreen woodland.

Once they’re established, the silver squill requires minimal watering–they are considered to be drought-tolerant, much like succulents. Be sure to allow the top inch of the soil or potting medium to dry out before watering in the warmer months. The plant will be in its rest phase in the winter months, so you should water half as often.

The silver quill will grow best in rich soil, but it must be well-drained. Preferably, it will be humus-rich and sandy. If you live in a warmer climate, you’ll want to grow silver squill in rocky or partially shaded areas of the landscape or garden.

When growing silver squills indoors as houseplants, interior temperatures are generally acceptable. If you’re growing them outdoors, they can withstand winter temperatures down to about 30 degrees.

It’s best to try growing silver squill outdoors during the spring and summer months, as they will do best when ambient temperatures are hovering at 60 degrees or higher; just be sure that if you have a cold winter, that the plant is moved indoors.

During its growth season, liquid fertilizer can be applied to the soil on a monthly basis.

The silver squill’s bulbs will increase throughout the years until the plant is crowded in its pot. The next time you repot it, you can separate some of the bulbs to start new plants.

When growing the silver squill in containers, you’ll want to wait until the flowers have faded and then un-pot the plant before gently breaking away its bulbs. You can pot each section with 1/3 to 1/2 of the bulb out of the soil–just be sure not to plant more than three bulbs in each container–before watering.

Though it is possible to propagate silver squill through seed, germination can be inconsistent, and its growth can also be very slow. These plants are usually propagated by the division of its bulb-clusters.

Toxic to people and cats!!!