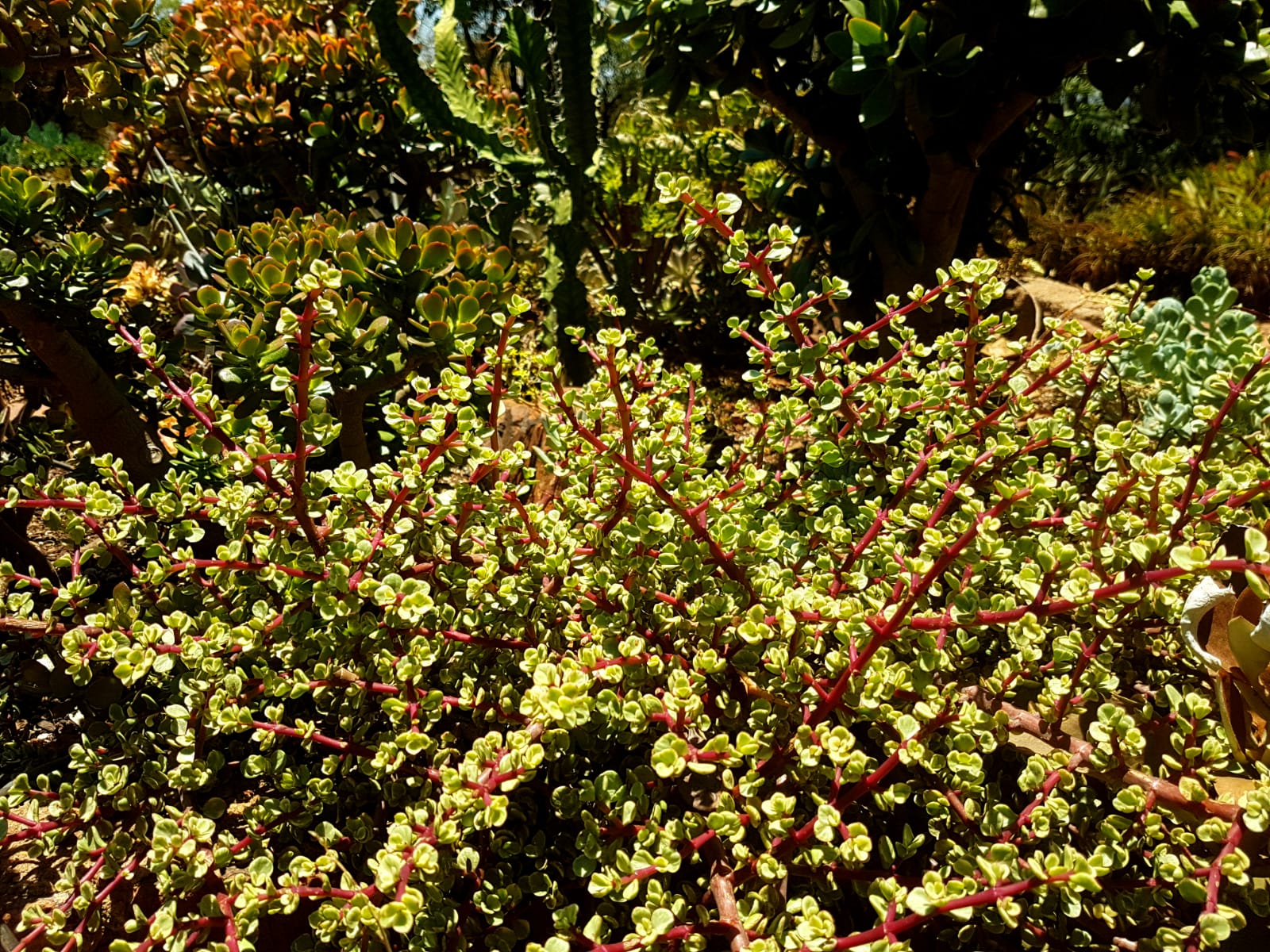 Portulacaria afra variegata (known as elephant bush, dwarf jade plant, porkbush, purslane tree and spekboom in Afrikaans) is a small-leaved succulent plant found in South Africa. These succulents commonly have a reddish stem and leaves that are green, but also a variegated cultivar is often seen in cultivation. They are simple to care for and make easy houseplants for a sunny location. In frost-free regions they may be used in outdoor landscaping.

It is a soft-wooded, semi-evergreen upright shrub or small tree, usually 2.5–4.5 metres (8–15 ft) tall. P. afra has smaller and rounder pads and more compact growth (shorter internodal spaces, down to 1.5 millimetres (0.059 in)). It is much hardier, faster growing, more loosely branched, and has more limber tapering branches than Crassula once established.

It is very widespread in the east of South Africa. In this moist climate, it is relatively rare, and tends to favour dryer rocky outcrops and slopes.

It is also found in much denser numbers in the dryer southern Cape. Here it occurs from the Little Karoo of the Western Cape, eastwards up until the thicket vegetation of the Eastern Cape.

It is popular as a specimen for bonsai, and as a hardy xeriscaping plant. Several varieties exist – some bred in cultivation, others naturally occurring:

“Limpopo”: A variety with much larger leaves. It is the natural form from the far north of the species’ range.
“Prostrata”: A low-lying, decumbent form that is frequently used as a ground-cover.
“Aurea”: A compact, upright form with rounded leaves that go bright yellow in the sun.
“Foliis variegatus”: A variegated form.
“Medio-picta”: Variegated with a lighter centre.

In Southern Africa it is commonly eaten, usually as one component of a salad or a soup. It should not to be confused with the jade plant, which is mildly toxic.

P. afra is also used to feed livestock during periods of drought due to its succulent nature. Most commonly used for cattle and goats, these plants also act as a supplemental source of water on top of their nutritional benefits for livestock.

This is one of the many plants used as a traditional treatment for skin conditions used by people in rural areas that do not have easy access to more modern medicine.

P. afra is capable of either C3 or CAM carbon fixation, depending on factors such as the season and the age of the leaves. In the dry season, it relies on the CAM pathway due to the lack of water, but when water is reintroduced, the plant quickly reverts to the C3 pathway in order to conserve energy. The maturity of the leaf tissue also matters because younger tissue is unable to completely seal the stomata, making CAM impossible. So while the older leaves are able to switch pathways based on the season and conditions, the younger leaves have to rely solely on the C3 pathway. It can sequester a maximum of 15.4 t CO2 ha−1yr−1.

Nationwide delivery with The Courier Guy