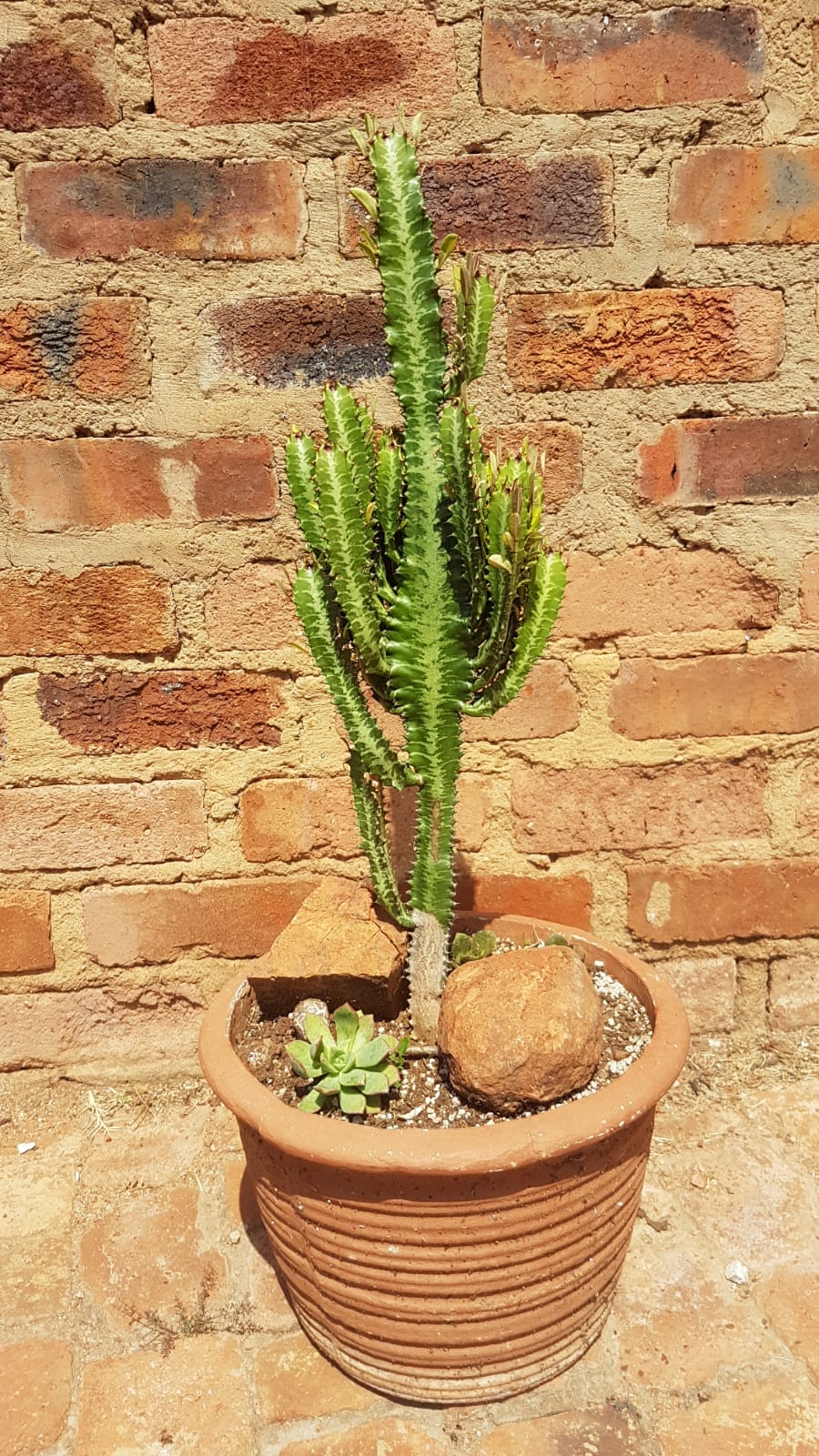 African milk tree (Euphorbia trigona) is native to Central Africa. It is often grown as a hedge there, useful for its rapid and enthusiastic growth, though its roots are not invasive. Though it looks a lot like a cactus, it is actually a succulent plant. It has many folk names, including candelabra cactus, cathedral cactus, friendship cactus, good luck plant or good luck cactus (the good luck attribution is probably due to how quickly it grows, and how easily it propagates). It stays lush and green throughout its growing season, and new growth has a lighter green color than the base plant.

The African Milk Tree is long-lived and can grow very vigorously, up to two feet a year in height, to a total of eight feet tall. It is fairly easy to propagate also, similar to a cactus, where one simply breaks off one of the “arms” and roots in potting medium. They’re grown by many gardeners in states with arid climates where the temperatures at night don’t go below 50 degrees, such as parts of Texas, Arkansas and Arizona. It’s hardy in Zones 9b through 11 in the United States, and can probably survive to Zone 8 with winter protection. African milk tree also popular as a decorative landscape or container plant throughout South America, and in the Mediterranean regions of Europe. Its dramatic size make it a sought after plant for plant enthusiasts. African milk tree is also very drought-tolerant and useful for xeriscaping. Because they grow so tall, but have a comparatively small root system, it’s not unusual for them to become top heavy or to even topple over, so be sure to keep them pruned, and use staking where needed.

This succulent likes indirect but bright sunlight: a southern-facing window will work well for it indoors, or an outdoor spot with partial sun. Full sun is suitable as long as the summers are not too consistently hot. Extra watering may be needed to offset too much bright sunlight.

This plant is not too fussy about soil but good drainage is essential. Heavy clay soils may hamper growth, and impede drainage. Since this plant is a good choice for xeriscaping, sandy soils are a good fit, and sandy loam probably best of all.

Being a succulent, the African milk tree doesn’t need much water. If there is a very bad drought, consider supplemental watering at the roots. But otherwise normal rainfall should be sufficient. Indoor specimens should be watered moderately once a week. Let the soil dry out between waterings, to mimic its natural habitat.

This drought-tolerant plant enjoys a dry or arid climate, and can tolerate fairly hot temperatures. It doesn’t survive the cold though, and won’t flourish if temperatures go below 55 F. If grown in a place with very hot summers, the plant should be located in a spot with indirect sunlight or partial shade, to avoid overheating. This plant doesn’t need any extra humidity, and growing it in an environment that is too humid may cause issues such as fungus or pests.

The milky white sap responsible for this plant’s common name is also a skin irritant, as well as an oral toxin, so handle the plant carefully and wear gloves. All parts of this plant are toxic if ingested.